This website or its third-party tools use cookies which are necessary to its functioning and required to improve your experience. By clicking the consent button, you agree to allow the site to use, collect and/or store cookies.
I accept
You are here: Home / How Methylation Therapy Can Help Your Depression

Jackie (not her real name) came to me with depression. She had been on Welbutrin for four years and wanted to stop it. Every time Jackie began cutting back on it, though, she became despondent. She had tried different things, including 5-HTP and L-Tryptophan, but to no avail. She had seasonal allergies too. I put her on a supplement regimen based on the Walsh Protocol. She was able to stop the Welbutrin. Her seasonal allergies also stopped.

Undermethylation is one of the subtypes described by William Walsh in the Walsh Protocol. The Walsh Protocol treats different conditions. According to the theory, anxiety, depression, schizophrenia, ADD, and behavior issues have different subtypes. In mainstream medicine, each diagnosis is seen monolithically. In other words, if you have the diagnosis, there is no difference in treatment. The Walsh protocol looks at it differently. The diagnosis is less important as the physiological subtype. Treatment starts by understanding what is out of balance biochemically.

Each subtype has a different biochemical signature that testing can determine. To understand under-methylation, one must understand something about genetics first. It directs our examination and understanding of how to treat the condition. To do this, we must understand epigenetics, histamine, and some basic chemistry. Don’t worry, I’m about to explain all of these terms.

What Does Methylation Do?

To begin with, I think it is essential to explain what a methyl group is. A methyl group is a small hydrocarbon. There’s one carbon attached to three hydrogens and one space to connect to something else. This attachment allows the methyl group to act as a messenger. Our bodies have thousands of these types of molecules that work in this manner. Every cell attaches and removes millions of methyl groups every second. Each attachment has a different meaning and message for the cell — the exact mechanism we don’t understand.
The methylation cycle in cells is crucial to many processes in the body. The diagram below shows part of the pathways related to methylation. Looking at the picture, you can see that there are, in effect, two circles — each of those sets of reactions cycles millions of times per second. Methyl groups get kicked out with each pass and then shuttled to where needed. If there is a disruption on the right side, methyl may stop producing. Disturbances on the left side can create too much methyl. As you can see from the diagram, heavy metals can interfere with both processes. You can also see how different vitamins and minerals such as folate, B12, magnesium, and B6 are essential to this process. 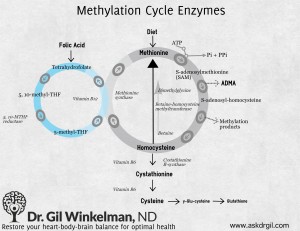 Now that we understand what a methyl group is let’s explore epigenetics. Epigenetics is the science of understanding how DNA turns on and off. Our DNA is more of a template than a blueprint. Different instructions are turned on in many ways. Methylation – the attachment of methyl groups to the DNA – is a mechanism of epigenetics. A methyl group attached to one region of DNA might turn off a gene. This is how our body adapts to different environmental events.
Let me give an analogy to explain. Let’s say that we took all the train track in the United States and wanted to put into a ten by ten room. Yes, I know this is impossible, but bear with me. How would you do it? You’d need to wind the track up into tight balls to do so. You’d spool it like a thread. Let’s say you wanted to take the train from Portland to Seattle. You would have to unwind the train track and then put the train on it and then rewind the track up as the train goes by. I go back and forth from Seattle a fair amount, so in this scenario, it would make sense for me to bookmark that location in the track so I could find it more efficiently each time.
This is how DNA works in the cell. It is wound up tightly around proteins called histones. Methyl and acetyl groups attach to the histones as a sort of bookmark system.

Epigenetics explains nature versus nurture because it shows how DNA has a tendency to express a particular way but can adapt to different events. What we eat, what we breathe, what we experience, all change how our DNA turns on and off. Methylation is one way that we can measure our epigenetic function.

Epigenetics may explain how people react differently to the same event. For example, why do two different soldiers who experience the same trauma have different responses to that trauma? To answer this question is beyond the scope of this article.

Tests such as 23 and Me that measure the DNA directly can identify point mutations called a single nucleotide polymorphism or SNPs. For some genes, these mutations are critical. For others, it is unknown what the impact on one’s health is. Smaller proteins are more likely to create more significant problems than larger ones.

MTHFR is a vital gene with regards to methylation. The protein that gene creates, Methylenetetrahydrofolate reductase, helps recycle homocysteine into Methionine. Several SNP variants exist, but a variation may or may not express as expected. Patients often ask about how to treat an MTHFR “defect.” Variant is a better choice of words. What we find is that just because you have a difference in the genes doesn’t mean that the protein doesn’t work. For example, many of my patients with an MTHFR variation should show up as being overmethylated. But just as many are undermethylated. Until we understand more about the interaction between the DNA code and the expression, it is likely a less useful test. A study from Australia concluded that there was no evidence linking mental illness to the MTHFR SNP. It’s just not an accurate way to predict genetic function. And I have treated people who were undermethylated for issues unrelated to their methylation status. They came to me for general health improvement. In the course of intakes and testing, I found they were undermethylated. Most likely, this “defect” is a normal variation in humanity. (I did a podcast about the dangers of just taking methyl folate if one is positive for the MTHFR “defect.”)

How do I Know I am Undermethylated?

Methylation is challenging to measure for few tests are accurate. I use the whole blood histamine determination test to find methylation state. Most people think about histamine in relation to allergies. Histamine also acts as a neurotransmitter. As you can see from the graphic below, histamine affects many different systems in the body. Histamine and methylation are inversely related. As methylation goes down, histamine goes up. As methylation goes up, histamine comes down. This relationship allows us to indirectly measure methylation. The challenge measuring in this way is that so many medications affect histamine. In Jackie’s case, we couldn’t get an accurate read on her histamine levels. Welbutrin has a mild anti-histaminic effect on the body. Her blood levels of histamine appeared normal. As I’m trained in the Walsh Protocol, I knew the safe manner to treat presumptively. 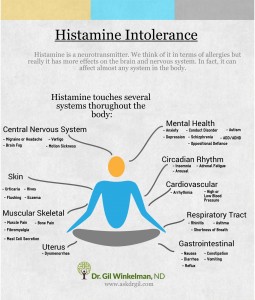 Another test that is sometimes used is the Doctor’s Data Methylation Panel. This test is great for finding out if someone is undermethylated. If someone is overmethylated, though, it may give a false negative.

What are some Symptoms of Undermethylation

The diagram below shows a list of symptoms that we see with patients who are undermethylated. In general, these people are more perfectionistic and do well in school. They may be obsessive with compulsive tendencies. They are competitive and strong-willed. Most autistic people are undermethylated though not all. One of my first patients with autism had extremely severe seasonal allergies. Typical naturopathic treatments didn’t help. Treatment of the undermethylation helped relieve her seasonal allergies and more challenging autistic behaviors.

Undermethylation or histadelia (high histamine) requires bringing methyl levels up. When I first started learning about the Walsh Protocol, I thought that giving methyl-folate and methyl B-12 was the appropriate treatment. Since then I’ve learned that isn’t the appropriate choice. Methyl-folate does donate methyl. But folate in general is a methyl stealer. It removes methyl groups from DNA. (Look back at the diagram too. Folate removes methyl from the system on the left side. ) Vitamin B-12 isn’t a particularly strong methyl donor.  The exception to not taking folate is if you are pregnant. In that situation you should take folate along with the recommendations here. 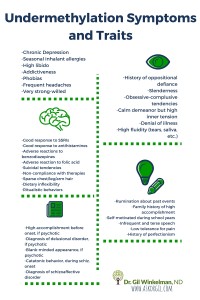 In general, I recommend L-Methionine and/or SAM-e for my patients who are undermethylated.  A higher L-methionine dosage is required than SAM-e. Patients also improve with zinc, vitamin C, Calcium/Magnesium, and Vitamin B-6. Inositol sometimes helps with sleep problems. Treatment can take months before an improvement is noted though.

Methylation therapy can be exceedingly helpful for many patients. The key is to know your status of methylation, copper, zinc, and other markers. A qualified clinician can help by knowing the appropriate tests and how to look at the big picture. Rarely, is there one problem in isolation. Let me help you or your loved one with their mental/emotional issues. Schedule today to start the journey towards greater health.